What is a Shadow Area when referring to mobile UVC devices?

What is a shadow area? It is an area that is not in direct line of sight of UVC disinfecting energy, and can simply be described as the backside of an object. When placing a mobile UVC device in any environment there will always be a so-called shadow area that will receive much less UVC, since it will mostly reach the area from reflection; hence, it will be less disinfected, if disinfected at all. Ideally, shadow areas should be avoided as much as possible.

To help minimize shadow areas, try to place the mobile device in more than one location to be sure to "hit" the important areas, which most often are high touch points on chairs, bed rails, door handles, tray tables, phones -  really all objects that are frequently touched by persons.

Some manufacturers recommend a single position, and claim to disinfect shadow areas. By definition an area is a shadow area that does not receive the same intensity of UVC energy as an area in direct line of sight. This typically results in longer run times, which can be a limiting factor in using a mobile device – because time is money! And short turn-around times are critical. Hence it is more efficient, and effective, to run quick multiple cycles in various locations to limit, or eliminate, any shadow areas.

To help assess if an area has received the desired dosage of UVC, Dosimeters can be placed in those areas to validate that the desired energy level has been reached.

Dosimeter cards are available in: 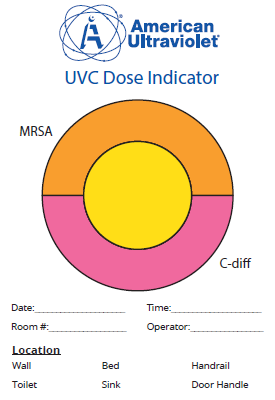