We are often asked to take UVC intensity and dose readings of our equipment (both prior to shipping and after installation) to verify the final product performs to the designed specifications. We also have been asked on several occasions to evaluate customers' existing equipment - often purchased from other companies. This story is an unfortunate example of the latter.

An existing customer, who uses custom designed equipment of ours in several of their "ready-to-eat" food processing facilities, decided to add an additional UVC tunnel over one of their processing lines with the intent of providing a very specific and very high dose of UVC to the bottle neck area of food containers. After weighing their options, they opted to go with a local company who offered what they were told was a similar type of system (at least according to the one photo on the supplier's website).

Upon receiving their new UVC tunnel, the customer contacted us to evaluate the performance of this equipment. The provider could not verify the UVC dose and intensity of the system provided, and they had no capacity to verify they met the project specifications. Additionally, when the customer compared what they received to systems we provided in the past, they were skeptical to say the least.

To hit the high points: 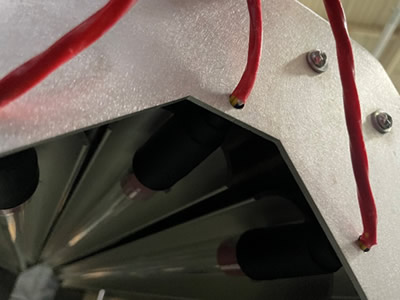 Shown above, wiring to the lamps was simply run through holes drilled in the side of the enclosure, without the use of liquid tight conduit, or any type of bulkhead connectors, to prevent moisture from washdowns entering the system or wiring inadvertently being pulled loose or frayed in day-to-day operations.

The latch used to secure the access panel on the side of the tunnel was a common gate latch typically found on fences and sheds in residential applications, and the single latch did not close the access panel well enough to prevent UVC light leakage into the occupied space of the production facility, creating a safety hazard.

When a profiling radiometer (EIT PowerMAP II model PM2-L) was placed in the system, and the system was run for 30 minutes, the UVC intensity peaked 45 seconds after startup and was at less than half that intensity in less than 5 minutes. After 30 minutes, the intensity had dropped to below 29% of that peak output, while the temperature inside the system continued to rise. This graphic shows temperature in pink, and UVC intensity in green, over the 30-minute system run.

The systems we had previously provided delivered significantly higher and more consistent peak intensity due to proper understanding of required lamp heat management, and met all desired design and performance specifications.

We are glad the customer reached out to American Ultraviolet for professional assistance when they realized that something was not working correctly with the system they had purchased from a competitor.

For comparison, the system that should have been supplied looks like this: 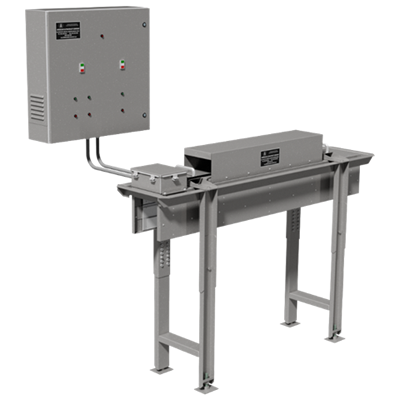 American Ultraviolet has been the leader in Ultraviolet technology for more than 60 years. We have provided our standard and custom equipment for the biggest names in food processing and packaging. Contact one of our knowledgeable sales engineers with your project specifications, and let us show you why.