Why UVC For Powdery Mildew And Bud Mold

UVC is a way to combat Sphaerotheca macular (powdery mildew), Botrytis cinerea (bud mold, or gray mold), and other types of DNA-based molds and bacteria that plague growing plant life, including cannabis plants. UVC is energy from light that is outside of the visible spectrum, and it's been used to inactivate DNA-based microorganisms since the 1850's. The UVC light emitted from American Ultraviolet lamps, at 253.7 nm, attacks the DNA/RNA of mold spores and bacteria, preventing them from replicating, and turning the microorganisms into harmless, microscopic dust.

Because UVC technology involves shining a particular spectrum of non-visible, and non-penetrative light on the desired target, there is no residual left behind. The cannabis product is not altered by the exposure to UV light, and any DNA-based surface microorganisms, such as molds, bacteria, and viruses, are reduced, or even eliminated entirely.

Using measurement, calculation, and experimental data, the precise dosage of UVC energy has been established to inactivate mold spores, bacteria, viruses, and other undesirable microorganisms. Coupled with innovative and proven energy-emitting lamp technology, effectively using UVC to reduce Powdery Mildew and Bud Mold - as it has been used in HVAC systems, and healthcare settings – is a process of applied math and science, rather than one of smoke and mirrors. 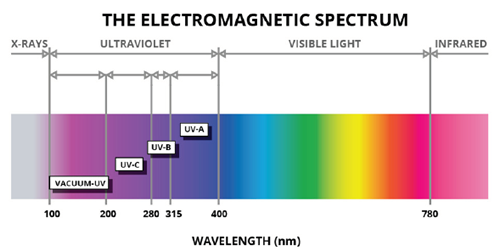 Bacteria, molds, and viruses require varying total dosages of UVC light for inactivation. Some molds require 50 times higher dosage as compared to bacteria to achieve the same level of reduction.

UVC dosage is the product of the Intensity of the UVC light and Exposure Time
Intensity is determined by the UVC output of the light source and its proximity to the target.

In other words, the closer of two equal UVC power sources will provide the greater intensity. When locating the UVC light close to the target area is difficult, higher output lamps can be used to overcome the proximity issue. UVC lamp intensity is determined by the UVC output of the lamp, which is typically expressed as microwatts per square centimeter (µW/cm²) at a distance of 1 meter. Math and physics are used to calculate the change in intensity at distances other than 1 meter.

An adequate dosage of UVC light will act on Powdery Mildew, and Bud Mold, just as it does on other DNA-based microorganisms – it will damage its DNA such that it can no longer replicate, and therefore will no longer be viable. Too little UVC won't reduce Powdery Mildew enough. Too much UVC can burn the cannabis plants. The proper amount depends on the intensity of the light source, the amount of time it's exposed to the light, and how close to the plant the light is located. In many applications, a 3-log or 4-log (99.9% and 99.99%, respectively) reduction of bacteria is the goal, and anything beyond that is a bonus. So, even if you don't completely eliminate Powdery Mildew and Bud Mold, UVC treatment will still reduce it in some capacity. 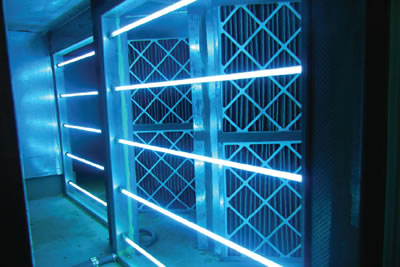 Most cannabis growers who have already used UVC to protect against Powdery Mildew, and Bud Mold, and have been disappointed with the outcome, have done so with a form of a handheld unit. These units vary widely in their intensity, and quality. And, because a human being must use their own judgment as to how far away to hold the fixture, and how quickly to move it, rather than using applied math and science, it is more likely that a less than adequate dosage was applied.

In addition, if a grower was trying to treat already visible Powdery Mildew, it was likely too late, as the visible signs show up well after contamination. Finally, current research indicates that the surface treatment of cannabis plants with UVC doesn't systemically solve the outbreak – the Powdery Mold will return, unless the grower continues to treat the plants throughout the grow cycle. And, even then, there's still a chance that the product of the grow will still be contaminated and will not pass testing.

To learn more about our Horticulture/Cannabis UVC solutions, please visit our technical library where you can download and print literature.

Prolonged, direct exposure to UVC light can cause temporary skin redness and eye irritation. American Ultraviolet systems are designed with safety in mind and, when properly installed by a professional contractor, do not allow exposure to UV irradiation and allow for safe operation and maintenance.